Despite all the fears and worries.

It was not easy but I didn’t expect it to be so that is fine.

The start from the spectators view.

There were plenty of stations to get water from with sports drinks and gels at three points around the circuit. At each of these stations there were plenty of volunteers so there was no congestion. At the end there were again plenty of people to hand out the medals and goody bags. There was even someone to give you a print out of you finish and chip time.

I chose the Milton Keynes marathon because I assumed that it would be quite flat, lots of roundabouts but flat. I was correct in that it wasn’t mountainous but there were quite a lot of short ups and downs as we went under lots of under passes and over hump back bridges over the canal.

These obviously took a lot out of our legs.

I enjoyed the course – there was some road running at the beginning around offices but it was mostly on cycle paths and paths. We went through housing estates and parks, through wooded areas and around lakes. 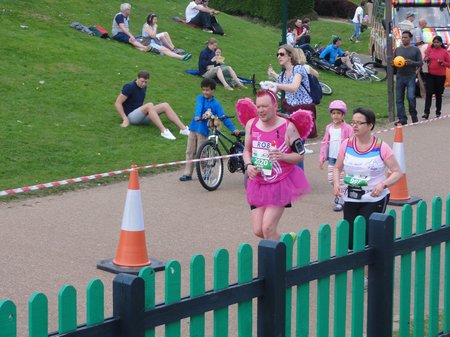 The busiest part was in a park (I am not wearing the pink Tu-tu!)

The course was well marshaled and there were plenty of supporters. There were also parts with very few supporters but that was OK as these were quickly followed by supported parts. Most importantly the course was a single loop and not laps. There was one part where we were running alongside those ahead of us but this was towards the beginning and not at the end when we were tired!

It was a hot day! There was a fair bit of shade along the way which helped but it was hard. At times I felt quite sick but wasn’t sure if this was to do with not taking on enough or taking on too much!!

At half way I felt strong (half marathons will seem easy now!) and we were running at a consistent pace of between 10.20 – 10.30 min miles. This was probably a bit fast but I was just relieved that it wasn’t any faster! My running partner had a knee injury that (unknown to me) started playing her up at 7 miles into the race. She was able to keep going until just before 13 when she began to struggle. I slowed down to stay with her but I suspect that this was the beginning of the end for me. My muscles began to cease up a bit and once I had walked once the barrier had been broken! It was easier to walk bits from then. I did mainly keep the walking bits to the uphill bits, they were so steep!

I started at 26 and worked backwards. Therefore the first point ti aim for was 6 miles in – 20. Then 13 (half way). the next obvious point was 9 – down to single figures and from there 3 miles intervals. It did work – sort of!

Very, very hard!! No other way to say it. At one point I thought that I would have to be carried to the finish but I would not then get the medal so I pushed on! The finish for this marathon is the MK Dons stadium. This came into view during the last mile but seemed to be so near but so far….

I knew that once in the stadium we had to run around the edge of the pitch which I knew would be very hard. However, on entering the stadium you didn’t have to go right around. This was really good news to me and meant that I was able to run around to the finish. Within in reach of the finish line my calf began to cramp but, thankfully only for a second and I made it across the line in 4hrs and 49. I was so pleased with myself 🙂 Under 5 hours. VERY pleased with that. No regrets at all – just pride. (Oh I did feel REALLY ill at the end but I was able to move incredibly well the next day!

Will I do another one? Really not sure yet….. One is definitely enough for now and more than I thought I would ever do 🙂

38 thoughts on “The Milton Keynes Marathon”