I was privileged to attend a class at my local yarn store (The Sheep Shop) on Saturday. I say privileged because without Joanne it would totally have passed me by. The class was run by the lovely Gillian and was all about different styles of knitting. It was really interesting. Also quite intense. 3 hours of concentrated knitting. You know the sort….learning something new for the first time concentrated.

To set the scene – I knit in the traditional English or cottage style where you hold the yarn in your right hand and ‘throw’ the yarn over the needle. Having thought about it I suppose it is quite a clumsy style but it was the one I was taught and, until recently I haven’t thought anymore about it. Then I met Joanne who is very interested about finding the most efficient way to knit (well it is her job!). 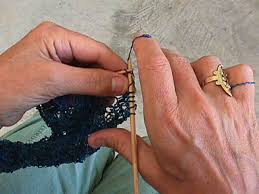 Throwing the yarn with the right hand .Source

We started off with looking at the continental style of knitting (Swedish if you live in France!). This is different to my style because you hold the yarn in the left hand. As I do this for crochet this was not too hard a step for me. It also wasn’t too hard because I had actually done this, with my left hand, when doing stranded knitting:

This is what I made – my first ever piece of stranded knitting. When I made this I had the grey in my right hand as I always do and the coloured yarn in my left.

This time I only had one strand of yarn and it was in my left. 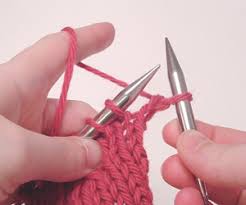 With this style of knitting you sort of manipulate the needle around the yarn rather than the other way around.

I really like this style and found the knit stitch to be really fast. Then came the pearl. This seemed a lot harder and took a bit to get my head around it. I did get there in the end but so far it is not as quick as the knit version.

We then moved onto a stitch called Norwegian Pearl. Again the yarn is held in the left hand. It is a way of doing a pearl stitch keeping the yarn at the back of the work. For anyone who has done 1by1 rib you will know how amazingly useful this will be. No more switching forward and back between each stitch! I liked this,  as again it meant more manipulating of the needle rather than the yarn around the needle.

Next came a style of knitting that (I think) originates from Shetland. It involves a special pouch that you put one of your (long) needles into. This keeps it still and  means that you don’t really have to hold this needle as such.

The idea behind this is that you work really close to the end  of the needles and simply flick the yarn over the end of the needle. It is meant to be really, really quick. Not for me however. There was one lady on the course who had back problems and she thought that this style of knitting would really help her.

Finally we were introduced to Portuguese style knitting. Joanne thought that this style of knitting might come across as a bit pretentious as you loop the yarn around your neck (or attach it to a pin). You hold the tensionin the right hand and the use your thumb to flick the yarn around the needle. Rib is also easy as you change the position of the yarn with a flick of the thumb. I did find that my knitting ended up getting closer and closer to my face as I forgot to pull the yarn around but I am sure that is just a beginner’s mistake.

Which style will I adopt? Probably a mixture. As I have been playing around a bit more I got quicker at the continental pearl but the Portuguese style was one where I could do without looking quite quickly. A good test as I like to be able to knit without looking as it means I can do it during car journeys. I have the yarn for a cardigan so will let you know which I choose to make this. It will be one of the new versions as it seems like the perfect opportunity.

Which style were you taught to knit in?