On the first Friday of this year I took my ‘annual’ pilgrimage to buy new trainers.  I have put annual in inverted commas because with the miles that I run you should change them more often than that and so always enter the shop knowing that I will get a bit of teasing about the state of the trainers I am wearing.

This year, due to my injury the jokes had started even before I went to the shop. The physio took one look at them and, politely (at first) suggested that I should invest in a new pair.  I can see his point. The soles are worn bare so there is next to no grip. Obviously they were dirty but the worse thing was that any support is probably almost non-existent, hence possibly the injury?

See what I mean?

These are them when they were new! A bit different don’t you think?

So how often should you change your shoes?

The man in the shop said 300-500 miles which also seems to be the consensus having done a google search.  (ooops I did more like 700!) They do make it clear that it depends on you as an individual. We are all different shapes, sizes and run with our own individual style. One thing to be sure, worn out shoes will probably mean that your body starts to give you niggles.

On my search I did find this handy little shoe tracker to help you keep an eye on how many miles you are running.

How many pairs of running shoes should you have?

Apparently more than one and by this I don’t mean 1 pair for the road and 1 for trail, but 2 pairs that you can rotate between. My husband thinks that I am having him on but there are good reasons for this. There are the obvious ones such as there will always be plenty of time to allow shoes to dry out between wet runs. The gel and foam within your shoes also needs time to recover after a run. If you don’t do this then they will lose their bounce more quickly. It will also mean that you will not find yourself in the situation that I find myself, having a pair that is fit for the bin with another pair that needs breaking in gently. Normally the idea of doing a few short runs is painful for me (it will obviously not be a problem for me as I shall only be doing short distances when I start running again!)

Having two pairs does not mean spending more money than otherwise as they will last the same amount of time or even longer.

Where should you buy your shoes?

I am a great believer in going to proper running shops. Yes they are more expensive but the service I had was excellent. I was filmed on a treadmill wearing neutral shoes and then ones with progressively more support. You might think that once they found a pair that suited me they would sell me those  but no. They found 3. I was then sent outside to run around to see which ones I really liked. The whole experience was lovely. I also got to spend an hour or so talking with someone who really got running and what it means to me.

I wonder how long these will look like this? They certainly scream NEW SHOES!

Thank you to all who have commented on my last post. It is definitely great to be back. Look at me 2 posts in one week!

At the weekend I did something that I am slightly embarrassed to admit. I went to London….on….my….own. I know that it sounds mad but it is true. I got dropped off at the station. Got on a train and sat down to crochet with everything…..quiet. Yep, no chattering children but a VERY noisy old train. Oh well everything couldn’t be perfect could it?

My reason for going was for a get together for everyone running the London or Brighton Marathon for MIND.  Amazing!

This is the entrance. The TV’s showed the race. I had no idea that there was such a place. Right by Liverpool street should you be wondering. The best bit was that MIND runners get 20% off all the goodies in the shop. How tempting is that?

Inside there are a lot of lovely things. Some really nice tops and lots of shoes…….

Downstairs was amazing. There is a ‘locker room’ with showers. The doors were amazing as they were really well hidden.

All this showers bit was very important because we were going on a training run before lunch and talks. Don’t want to be all smelly for the rest of the day! The run was a 10k which was great because I knew that I could do it. The worst bit was the worry that I may just get lost. There was someone at the front and someone at the back but I was unlikely to be at either of these points so needed to ensure that I kept a close eye on those in front. This was harder than it might appear because London is full of people. (I know, shocking concept!)

This is a picture of the route.

Reading the blogs of people lucky enough to run in London regularly (Lottie of London) this was a really big thing for me as I read their posts and wish. We went past the London Eye, Big Ben and the houses of Westminster as well as some lesser known parts.

One thing that I had not appreciated before Saturday was the problem that people cause. I run on my own more often than not, in quiet streets. The only time people are a real problem is when I run in organised events. Even then the people are generally moving in the same direction but in London there is no order whatsoever. I now have a great deal of respect of people running in cities. Dodging takes on a whole new meaning! I am also convinced that I ran a bit further than the 10.2 they said I did.

On an entirely different note, my Garmin took some adjusting to working in London and being surrounded by tall buildings so it didn’t record the full 10K as it took a while to find a reliable signal (at one point the pace was 03.00 minute miles!!) I do think that I did run quite fast – probably all that dodging about!

As far as my husband was concerned I actually came away without spending any money despite being very tempted!

Some of you will be aware that I have not posted my usual weekend post this week. This is mostly because I had a wonderful day out at Alexandria Palace in London. I have often seen these amazing building from the train as it is set up on top of a hill but have never been to it before. 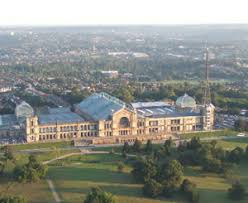 Getting up close was a bit of a disappointment as the windows are all boarded up but inside you can still see many grand features. 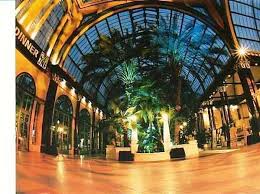 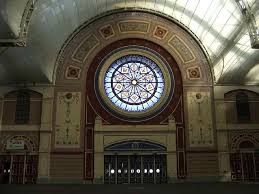 I did honestly spend some time looking at this but mostly I was busy looking at:

Beautiful intricate shawls made from linen.

A knitted wedding outfit for him and her.

A whole knitted community. This is the farm.

And a cub scout camp site!

Of course there were also lots and lots of stalls to walk around with lots of lovely things to buy!! I am very proud to say that we managed to get around every stall and stop at all the ones we wanted to (just). Oh and yes – I did spend some money…..

Of course I had to buy some bargain yarn but I do know what I am going to do make with it. Something really rather special…….

Some really bargain wire and a few beads (well I couldn’t totally resist!).

Some yarn with Stainless steel in it. I have been looking to get some of this for ages so am really excited about this purchase.

A ‘vintage’ crochet book that is literally as old as me but has some great ideas in it (and yes there is a granny square top in here which will not be being brought back to life.)

I couldn’t resist all the bargain offers on magazines with their freebies either. You never know – I may be making myself a dress next year!!!!

This bag came with some of the mags. I love it.

I am guessing that you can tell I had a good time? I have come back buzzing with ideas and don’t really know where to start!  Oh yes I forgot to say that when at the show I saw someone exhibiting a necklace like one of the ones i have made. I was quite pleased in a way as it shows that I am not completely crazy and that maybe I should believe in myself a bit more!

Have you ever been to a show like this and come away with loads of ideas? Did you follow them up or did they get forgotten?

I would never use the word creative to describe myself, many others but not that. I can make a tune with the recorder, piano and clarinet but only if I have got the music there. I can knit a jumper if I follow a pattern and I can make a cake if I follow the recipe. Are getting the gist? I simply do not make things up for myself I maybe adjust things a bit by changing the colour of yarn or beads used which is what I have done in the pieces of jewellery that I have made so far but that doesn’t count as being creative – does it?

The last bit that I have made was following a pattern but it wasn’t intended to be used as jewellery. Here it is:

(Sorry about the photo, I will try to put a better one on Flickr later. ) I have called it Picot Arch Necklace as the pattern I used is an edging named Picot arch edging. I basically followed the pattern but added some beads in as I went. So is this being creative or not – please let me know your thoughts.

I thought that this pattern would make a good tiara for a wedding if you turned it upside down like this:

I would obviously have to use thicker wire so it would hold its shape – oh and different beads. Once I have been online and bought a band (oooh goody, more shopping : ) ) I shall have a go. Will let you see once I get around to it.