I am not one to sit idle as you will be aware and last week was a bit of a challenge. The steroids that I was on made me shaky and I found it hard to concentrate on things for long. I was also mostly based around the bed thus ruling out many projects such as beading.

I have had a technique on my wish list for a while and I thought that this may well be the time to try…..viking knit. Viking knit is not knitting, really a weave. You end up with a rope like piece:

These can then be turned into jewellery pieces like: 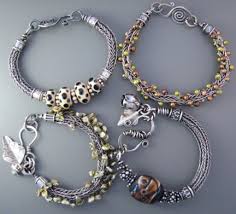 I had bought the kit to do this when I did the celtic heart necklace with the wire mesh.

This is the kit I got. It comes complete with a pair of nail clippers!! There is also a simple wire gizzard and some wire to have a go with. It was this wire that I started to work with. I found the instructions easy to follow and was able to get going quite quickly.

The beginnings of a Viking knit

I obviously made a mistake on the second day that I picked this up and ended up having to undo a load due to leaving one of the loops out, but that is normal is it not? Overall, I got on very quickly the second day.

It grew quite quickly.

The one thing that I did struggle with was that I knew that I would be ‘stretching’ the braid and had no idea as to how much it would grow. I simply didn’t know when to stop. In the end I decided to stop when it nearly reached around my wrist.

Pulling it through the draw plate.

Pulling it through the draw plate means that you can set the desired width and length. I am hoping that this will help to iron out the ‘imperfections’ that occurred whilst I was ‘weaving’. I shall keep you informed…..